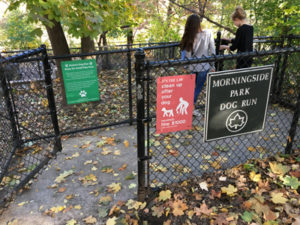 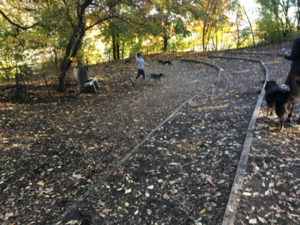 Description: Morningside Park sits on a narrow strip that stretches 13 blocks through the neighborhoods of Harlem and Morningside Heights. With its convenient location in the heart of Northern Manhattan, only a few blocks from Columbia University, Riverside Park, St. Nicholas Park, the Apollo Theater, and the northern tip of Central Park, Morningside Park also hosts a good-size, fenced-in dog run. It features two sections to separate large and small dogs with dirt ground covering and a watering area. There is also cleaning equipment, poop-bag dispensers, bench seating and waste bins available. The run is slightly steep and features railroad ties to act as steps to keep people and dogs from sliding down the hillside. 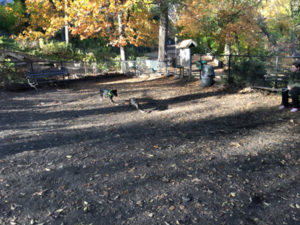 REVIEW BY DUSTY BLUE: This is another cool dog run in the Harlem/Northern Manhattan area. It’s also one of the larger ones on the island. The dirt ground cover was a bit messy, and my owner complained that I tracked dirt into the car, but I loved running full tilt in this place. There aren’t that many parks or runs where I can do that. The railroad ties were fun to run up and I met quite a few nice dogs (including a basenji and a couple of bull dogs) and people here.