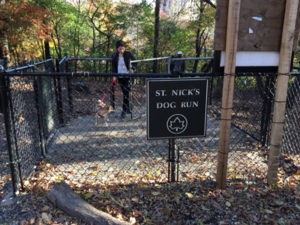 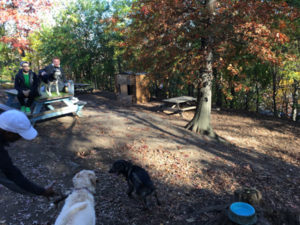 Description: Saint Nicholas Park is a New York City public park located in Harlem next to The City College of NY, around 134th and St. Nicholas Ave. The nearly 23-acre park is contained by 141st Street to the north, 128th Street to the south, St. Nicholas Terrace to the west, and St. Nicholas Avenue to the east. Within the park is one of Manhattan’s largest completely fenced-in dog runs. It features two separate sections for large or smaller dogs, with plenty of rocks and large boulders for climbing. There is a mixture of cedar chips and dirt ground cover, cleaning equipment, picnic table seating, poop-bag dispensers and waste bins available. 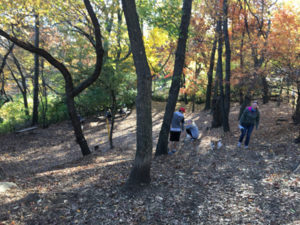 REVIEW BY DUSTY BLUE: This is one of the most adventurous dog runs I’ve seen in Manhattan. There are some boulders and rocks to climb on and some of the climbing could be a little treacherous for smaller dogs like me (or even people). You could actually fall off of the large boulder that separates the higher and lower edge of the run. But the place is big and has plenty of running room, trees for me to sniff and pee on, and there are two sections to separate bigger and smaller dogs. I thought this was a cool and unique place! No watering area, though.