While I was at my favorite dog park today, I was viciously attacked by an unfixed male Pomeranian. You may laugh when you see the picture of one below. They look like stuffed toys, but I will tell you this guy was literally the wildest dog I’ve ever encountered. And those who know anything about dogs know that it’s the smaller dogs that tend to be the craziest. 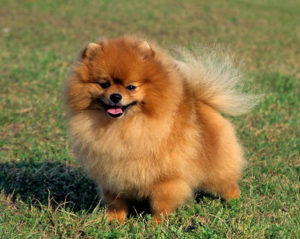 I’ve actually seen this guy before and we got along fine, but last time I saw him, he ran all the way across the field at our park to ferociously go for my neck. I’m pretty docile so I didn’t really fight back.

Our two owners realized we were both unfixed males and that the Pomeranian seemed to have some territorial issues with it. Our last encounter was pretty dramatic and my owner muttered under his breath that it was difficult for him to not want to hurt the other dog. The other dog’s owner was very slow to pull his dog off and my owner spent a good minute or two subduing this little devil.

I know it is said that you should not subdue another owner’s dog, but the other owner was pretty unaware of what was going on even though the growling and barking raised a lot of attention with other owners. This little guy was so fast that it was hard for my owner to scare him off. Every time he pulled him off of me and chased him away, the Pomeranian would shoot right back at me as soon as he turned around to pick me up. My owner had to subdue this dog by grabbing him by his front paws and holding him still. The Pomeranian submitted after this and didn’t try to do anything.

So today when we saw the owner and his Pomeranian, my owner and I figured the lesson had been learned. He kept his dog on a leash and we gave them about 30 yards of space between us. The Pomeranian strained at the end of his leash and started barking which scared me and literally made me want to jump up into my owner’s arms.

Once we got out of sight of these guys, I was back to my normal routine of sniffing and peeing on everything in site. When it was time to go home, we could see from a distance that the Pomeranian and his owner were still in the park by a picnic table and the crazy dog was now unleashed. We had to walk right by them to get to our car, and it was impossible to avoid it.

We gave them a good 50 yards of distance between us and I actually stopped in my tracks. But another dog came over to play with me and I forgot about everything. In about two seconds, the Pomeranian was on my neck again and my owner was pretty pissed. He pulled the dog off of me and chased him around while clapping his hands to keep him away.

The other owner strolled over and started issuing orders… “Just grab your dog and I’ll get mine.”

As soon as my owner turned to pick me up, the Pomeranian was back on my neck and my owner had to scare him off. After about 3 minutes of my owner clapping his hands and running interference, the other owner was able to grab him and hold him off.

My owner did not say anything as we walked away. The other owner apologized, but my owner told me he would call animal control if he saw that dog unleashed in that park again.

Lessons from this? I don’t know. If you have an aggressive dog, you need to keep it on a leash… especially if you have seen it attack a particular dog and that particular dog is within eyesight. Dogs will be dogs. I don’t know how many times I’ve heard owners say, “Well, he never does that at home!” You’re not at home. When dogs get around other dogs, anything can happen. Be a good dog-owner citizen and keep your dog under control.

I Was Mugged By a Pomeranian!