Last week, a Washington, D.C. TV station WJLA partnered with Ellipse Analytics to test several brands of wet dog food for the drug pentobarbital, a common euthanasia drug used to put down pets and zoo animals. Of all the brands tested, the popular brand Gravy Train, repeatedly came back positive for pentobarbital, according to the station. Out of the 15 cans tested, nine tested positive and the FDA currently allows no traces of it in any dog foods or treats. The results of the study have prompted the FDA to announce plans for a full investigation. 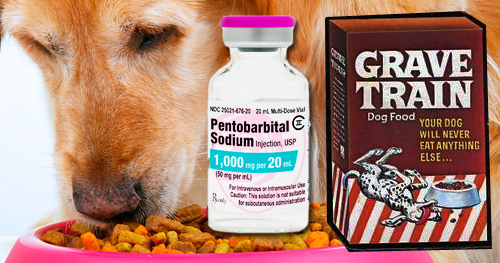 You may ask yourself, “How did a euthanasia drug get into dog food in the first place?” … and as a dog (a very handsome mini Australian shepherd, to be specific), I’m right along with you asking the same question.

Apparently, it is well known in the pet food industry that generic “meats” and “meals” can contain euthanized animals. So if a pet food contains “animal byproduct meal” then almost any animal that’s not a bird can be in the food, including animals that were euthanized.

So now you know, and to paraphrase a famous quote from the movie “Soylent Green,” “GRAVY TRAIN IS PEOPLE!!!”

What are the dog foods to watch out for? Well, armed with the knowledge that any “generic” dog food (i.e. any food you might find in your local convenience store) can contain meats and meals made by ground-up, euthanized animals, you should go to your pet shop and ask them for specific brands that use farm-raised or wild-caught animals. 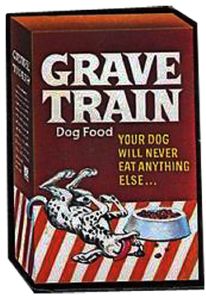 Another brand to avoid is Evanger’s Dog and Cat Food. Evanger’s recalled some lots of its Hunk of Beef product due to the presence of pentobarbital last year. Deaths were reported by pet owners in relation to this recall.

In a coincidental case of “life imitating art,” I would like to point out that the Wacky Packages company seemed to predict this strange turn of events in their “Grave Train” sticker parody (see photo) in the late 1960s. Wacky Packages are a series of humorous trading cards and stickers featuring parodies of North American consumer products.

All kidding aside, I hope that the FDA puts a crack down on all pet food manufacturers who are using euthanized animals in their foods. There is no excuse for that!