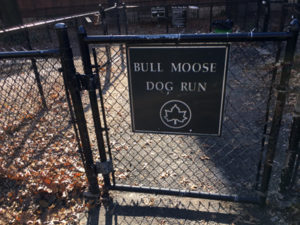 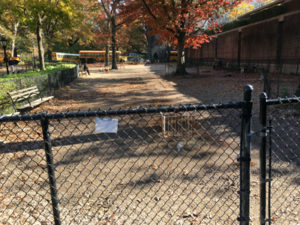 Description: Named for the 26th president of the United States, Theodore Roosevelt Park is located on Manhattan’s Upper West Side, adjacent to the American Museum of Natural History. The park is co-managed by a nonprofit (Friends of Roosevelt Park), along with the Museum and New York City’s Parks Department. The Bull Moose Dog Run (named after the political party that nominated Roosevelt for the 1912 election), is an entirely fenced-in run with segregated areas for large and small dogs. It features a fine-gravel ground cover, a watering area with hose, bench seating, poop bags and waste bin access. 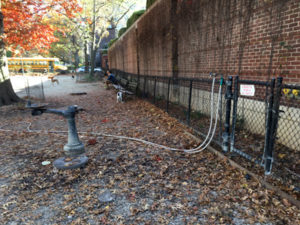 REVIEW BY DUSTY BLUE: On the day I arrived, after a big rainstorm, I was greeted by a big puddle at the main entryway. I didn’t mind, but my owner complained and also had to wash off his shoe in the watering area because he stepped in dog poop. Not mine, but from some other dog whose owner didn’t clean up after him or her. The big-dog section here is really big and that’s where I hung out… mainly because there was a big dog in the small dog section! They fence around all of the trees in this run so no dogs can sniff or pee on them, which I personally don’t like.